Karen Aloy of The Navarre Rader Quarterback Club said she thought this was a great way to carry forward the influence Ian had, and continue his inspiration out beyond 2010 and 2011. Ian served the community in ways he never knew, inspiring those he never met, and setting a standard that only a select few will reach. This scholarship is to recognize the students whose characteristics are similar to Ian.

In Honor of a Navarre High School Graduate 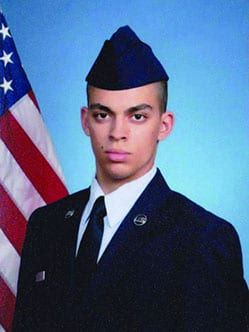 Senior Airman Keifer Huhman, a 2012 Navarre High School graduate, went missing on Super Bowl Sunday, February 7. Huhman was stationed at his first duty station at Dover Air Force Base working in cyber security. Huhman’s 1997 Ford Ranger pickup truck was found on the William V. Roth, Jr. Bridge that evening with the hood up and emergency flashers on. No one was around the truck. An investigation began the following Monday morning when Huhman did not show up for work and could not be reached.

On the eve of Good Friday, nearly seven weeks after he went missing, Senior Airman Keifer Huhman’s body was recovered along the banks of the C&D Canal. While questions continue to surround his death, his family is thankful to have his body put to rest.

In a post on the Facebook page dedicated to finding Huhman, his father said, “We will be bringing him (Keifer) to Pensacola for his final resting place at Barrancas National Cemetery. Thank you everyone for your support…Thank you everyone in DE who kept looking. Thank you for bringing my son home.”

In an official response from Dover Air Force Base, Tech. Sgt. Elizabeth Morris released the following: “On March 24, 2016, Senior Airman Keifer Huhman’s remains were recovered by the Delaware State Police and Delaware City Fire Department from the C&D Canal, three miles east of the William V. Roth Bridge. Huhman was assigned to the 436th Communications Squadron, Dover Air Force Base and went missing on Feb. 7, 2016. The facts surrounding this incident remain under investigation and no additional information will be released at this time.”